Project ISISX to be pitched to Netflix in April!

Reel Productions has completed production on a scripted series about a shadowy non-governmental group that fights the country's enemies by doing what the government can't or won't do. Lead by the mysterious "Mr Smith" and his right-hand-man "Mr Clark", the Organization takes on missions in defense of the country outside the political wranglings of the government. 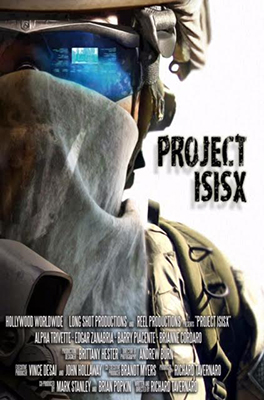 Project ISISX is a scripted series co-created by Vince Desai and John Hollaway, and written by Richard Tavenaro. In light of the numerous terrorist attacks which have been claimed to be orchestrated by the terrorist organization ISIS, Desai thought it would be a great idea to create a show that brought people of various cultures and countries together to deal with a common issue. Hollaway said, "What if there was a billionaire who anonymously funded speacial operators and people with specialized skillsets from various countries that formed a secret alliance to thwart ISIS before their planned attacks?" They then pitched the idea to Tavernaro and a short couple of weeks later, the first script for "Project ISISX" was created.

The series concept was discussed with Netfix and TNT Network and at their request for a completed pilot episode, a cast and crew was assembled. The pilot episode began filming early November 2016 in surrounding areas of Atlanta, Georgia. The cast was comprised of actors from the actual countries being portrayed in the series. Amongst the respective countries were actors from Nigeria, South Africa, India, Laos, Russia and the United States. Future episodes will include other countries that require people with particular skill sets for each mission.

Project ISISX first pilot episode completed production in 12 days and post-production began after the holidays on January 2nd. The completed and edited episode is on target to be pitched to Netflix on April 24, 2017. If the episodes are purchased, six more scripted episodes are ready for production to complete the first season.

Reel Productions, Project ISISX executive producers have been involved in reality based shows, scripted comedy, and the company's partners are executive producers for a full length feature film being released overseas, Canada, and the United States during the Summer of 2017. Great projects can be expected from the group and Projet ISISX is a show you don't want to miss!

Check out our social media for the latest updates!